Party Animal won the Kingston Sculpture Trail in 2021. Alex Davies who created the bronze goat sculpture won a £10,000 prize as well his sculpture being installed in the town centre this year for residents and visitors to be able to permanently enjoy.

Over 1700 residents and visitors voted for their favourite sculpture and Party Animal won 51 per cent of the public vote.

Davies said he was delighted to win the competition with this being his first sculpture to be installed in a town centre.

Party Animal is part of a series called Unwanted Monuments and Davies took inspiration for its name from people visiting cities to attend parties.

During the design process a traffic cone was placed on the goats back and Davies was inspired to create an interactive artwork which is designed to be touched, climbed on, and sat on like a children’s fairground ride.

Davies previously worked in blacksmithing before he moved onto bronze casting and founded the Milwyn Foundry in 2001 where Party Animal was created. 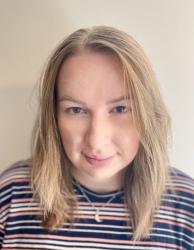 Latest posts by Frances Stebbing (see all)
Share the story