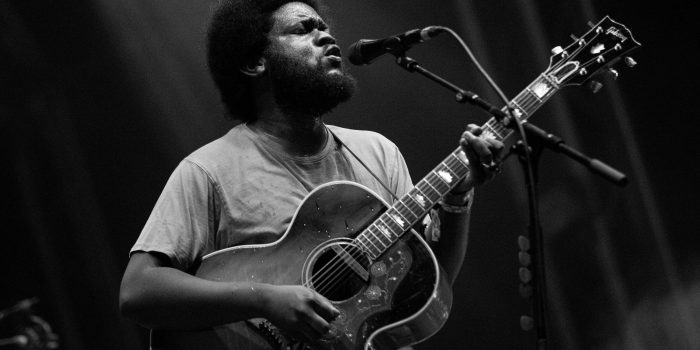 What better way to mark thirteen years of Banquet Records’ ‘New Slang’ club night than an acoustic set from one of the UK’s most exciting musical talents.

Hollywood actor and friend of Kiwanuka Jason Momoa was even in attendance to celebrate the occasion (backstage at least).

Now at 32 years of age, it still feels as though Michael Kiwanuka is an emerging breakthrough talent, but the indie folk, soul singer-songwriter has been around for a number of years since his debut album in 2012.

With his self-titled third album coming out next week on the back of a Glastonbury set and an excellent feature on Little Simz’s album ‘Grey Area’, 2019 could just be the biggest year yet for the North London musician.

Kiwanuka kicked off his New Slang set with new single ‘You Ain’t The Problem’. A soft acoustic rendition of his bositerous upbeat hit set the tone for the show, aided by a soulful female backing vocalist and a fellow guitarist beside him.

Without the crashing electric guitar riffs which often feature at the end of Kiwanuka’s songs, it was less Jimi Hendrix and more of a Marvin Gaye and Otis Redding-esque performance. All of whom have previously been mentioned in the same sentence as the man from Muswell Hill.

It is not always the case that a quiet audience can compliment an artist’s performance, but the Kingston crowd on Thursday night gazed in wonder during some of his brand new unheard songs and it worked wonderfully with his emotive style.

Even with an annoying smoke machine randomly going off in the corners of the standing area, Kiwanuka managed to create a quietly epic and celestial atmosphere inside a tatty Halloween-themed nightclub.

In typically British style, a loud ‘SHH’ would pipe up from the upper tiers of Pryzm’s awkwardly arranged main room. The largely middle-aged crowd were certainly not letting a few drunken murmurs spoil their Kiwanuka experience.

“There’s something wrong with you if this isn’t your favourite on the album,” he said before debuting his uplifting new single ‘Solid Ground’, followed by a surprise husky cover of ‘And I Love Her’ by the Beatles.

Kiwanuka also performed a soft rendition of his new single ‘Hero’, which pays homage to influential figures that have passed due to violence and explores the idea that “maybe all heroes die first”.

Despite the disappointing absence of his disco-influenced tune ‘Money’, Kiwanuka nailed the order of his setlist and arguably saved the best for last with his two big hits ‘Cold Little Heart’ and ‘Love and Hate’, which are two of his more rousing albeit sombre tunes. He encouraged a sing along and the sold out crowd did just that.

Michael Kiwanuka’s music is a breath of fresh air and his intimate acoustic show at Pryzm only amplified his incredible raw talent.