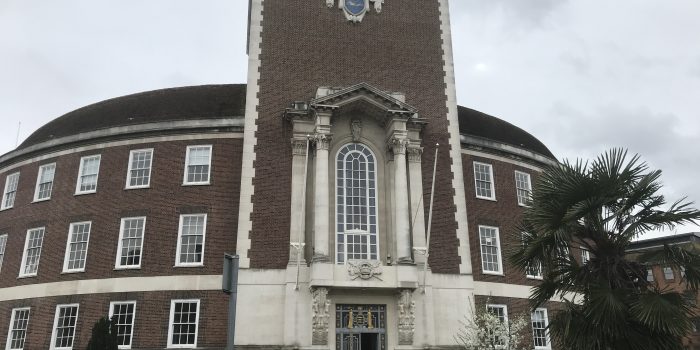 Kingston Council has had its plans approved to increase council tax by four per cent in this year’s budget.

The four per cent increase – agreed on February 27  –  includes two per cent dedicated to adult social care spending and 1.99 per cent that will be used for general purposes including paying for increases in staff wages for the council’s 1000+ staff and topping up the council’s reserves.

“We get very little central government funding. All our money comes from three sources. The main one, which is about 75 per cent of our funding, comes from council tax,” said Liberal Democrat Liz Green, who was council leader at the time.

Green said increasing council tax was the only way for the council to find the additional money it needed to balance its books and top up its reserves.

The increase will amount to approximately £1.19 a week extra for a Band D household.

Leader of the Conservative opposition Kevin Davis said the increase was part of a “do nothing” budget with a heavy price tag.

“What they’re doing is putting it into the bank account into the reserves and it’s not actually being spent on anything. It’s being tucked away for a rainy day that may or may not happen,” said Davis.

Green said the additional money will go into the council’s reserves so that if its accounts are audited it will have enough money to match its outgoing deficits and prevent it from being declared bankrupt.

Kingston Council has increased council tax for the borough every year for the past five years. 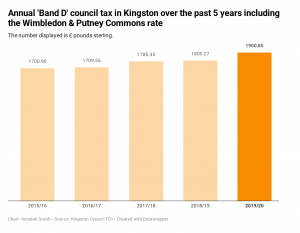 The two per cent adult social care increase agreed in February is the final part of a central government spending plan where councils were allowed to split a nine per cent increase in council tax over three years to address shortfalls in social care.

However, on top of the adult social care increase, the council has also added a general increase of 1.99 per cent, which is the most it can approve without a public referendum, taking it to a total of four per cent.

A council must obtain the permission of residents through a referendum if it wishes to raise council tax by any more than two per cent.

Green defended the decision and said a referendum would be difficult: “Would you like to pay more tax? No. That’s sort of your normal answer. It’s quite hard to persuade people that they do want to.”

She said despite Kingston’s rising demographic people were opposed to the increase because many were not exposed to the services and therefore did not see the results.

Adult social care and children’s services amount to 59 per cent of the council’s total expenditure in its 2020-21 budget.

“If you don’t have an older relative or a family member with learning difficulties or mental health problems or physical disabilities you will never see that. You’ll never see that service because you’ll never come into contact with it.

“It is right that we look after our most vulnerable and when you have a limited amount of money you have to prioritise,” said Liz Green.

Kingston Council was recently voted to be one of just three local authorities across the country that offered outstanding adult and children’s services.

“We’re putting it up by the maximum amount the government allows but we haven’t got a problem with adult social care? So, there are some strange things going on underneath all of this,” he said.

A lack of central government funding

Local government’s main form of funding used to be the revenue support grant (RSG) which was supplied by central government.

The grant is calculated by taking the council’s spending needs and deducting anything it could raise itself through parking fines, council tax, and local business rates.

The RSG has decreased year on year and, for the last two years, Kingston Council has not received any of it. 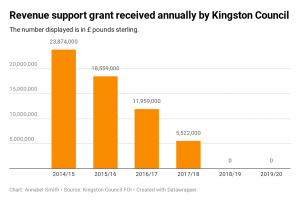 “In 2010, they [central government] gave us 66 million. They now give us nothing and their proposing to potentially charge us in the future for their redistribution,” said Green.

This is not to say the council receives no government funding whatsoever. The grants they still receive are smaller and are ring-fenced to specific areas of spending. 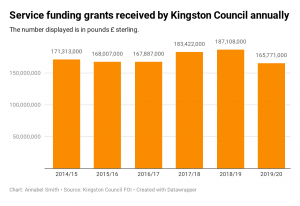 “If we’re not going to receive any government grant then we’re effectively independent of government and we’re not subject to the whims of them cutting money in future. So, in fact, being independent might not be a bad thing,” he said.

Davis accused Green and the Liberal Democrats of saving money in preparation for a pre-election spend.

“We’re two years into the election cycle with another two years to go. What I imagine is they’ll suddenly start spending money in the last year,” he said.

Green said Davis’ politics was getting in the way of reality but added: “To be totally honest if it was the other way around I’d probably be saying the same thing [about Davis] because that’s politics.”