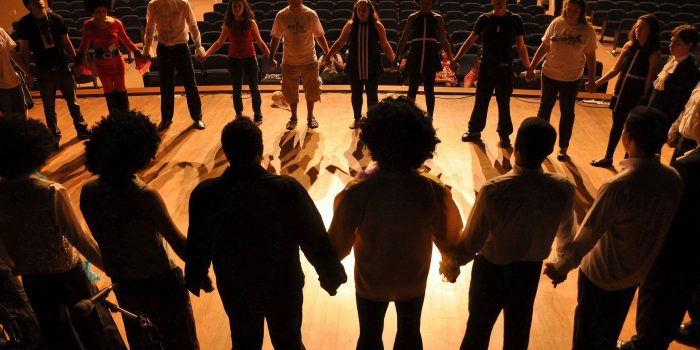 We all love to dance, right? What about highly interactive dancing with strangers guided by a spiritual leader for hours on end without any booze or drugs?

Despite sounding rather daunting, ecstatic dance, the practice of working oneself into a state of ecstasy through group-oriented dancing, has been growing in popularity steadily over the years as a fun way to socialise, burn calories and let go of some of those niggling worries. A wholly positive experience? Well, kind of.

Before attending my first ever class, I’d read that ecstatic dance brought together dancing (obviously), mindfulness and spirituality: a rave minus the drink, drugs and DJs, guided by so-called gurus and attended by the type of person who prefers energy healing to prescribed medication. And to some extent these tropes rang true.

“When I close my eyes in the dance, I picture the whole universe in my heart,” said Maelys, 24, as we queued up outside a community hall in North London.

Others looked as you might expect: plenty of piercings, bad haircuts and festival trousers. But it was the man with the knee pads that really made me think I was in for something ‘out there’.

“I do a lot of groundwork,” he explained nonchalantly. “The knee pads make it more comfortable to do certain moves on the floor.”

There were a handful of men in attendance, but women, mostly European, dominated the class.

The class began with an introduction to Seth, the ecstatic dance class leader, and then the strangeness ramped up. “Guys, walk around the room, explore the space and do your dance,” said Seth.

I spent a few minutes shimmying by the 60 or so attendees, mostly in their 20s, met with smiles and my own sense of palpable awkwardness wondering what in the world my dance could be.

“As you go by someone, welcome them to this event,” continued Seth in his soothing American accent. “Find a way of welcoming them, dance with them.” Mini duets broke out to trance music and effusive greetings echoed throughout the room.

For my part, the impromptu dance routines were quite enjoyable, it was just the amount of eye contact during that a felt a little intrusive, or at least very unnecessary.

After having been welcomed, I was thankful for a break in the dancing. Seth told the class to breathe in and breathe out deeply and the room produced a very loud, orgasmic, “Ahhh” on the outbreath. It was certainly relaxing, just not quite that relaxing.

Seth then guided us into groups of three and told us to “dance like your group is having more fun than anyone else’s”. It was hard to compete with the man slutdropping in the middle of his group.

“We have a few rules here guys: no talking and no spectating,” said Seth as I gazed in disbelief at one group writhing on the floor.

The “having fun” competition came to a close and we joined hands in a large circle while cacao, which supposedly helps to channel inner spirits, was served up to everyone in fancy porcelain cups. We were told after a count of three to shout out and let go of our worries, and then drink the cacao.

One. Two. Three. The room erupted into a mismatch of dispelled troubles before another congregated “Ahhh”, less orgasmic though more jarring than the last, whilst the crowd relished the bitter brown drink.

Before another two whole hours of dancing, there was a hugging exercise and we were taught to respectfully decline physical contact with a curt Namaste-esque bow. I just wish there had been a similar convention for asking the grinding couple to tone it down a little, or to get the sweaty, topless men to put their t-shirts back on.

One man actually scaled the pillar in the middle of the room, whilst a few slid between each other’s legs. Perhaps I’m just not au fait with ecstatic dance culture, but surely climbing up parts of the room is taking it a bit too far, especially when sobriety is mandatory.

As the class continued to bop, gyrate, pirouette and god knows what else, I was not overwhelmed by any great sense of ecstasy, and, neither, I suspect were many others.

But there was an obvious appeal to all this: a friendly, energetic crowd, complete freedom to dance (awfully) and a genuine warmth amidst all the enthusiasm.

As the class came to a close, and I came to shake off a nagging sense of embarrassment, we joined hands in a circle for a final exaggerated “Ahhh” on an outbreath, and we expressed our gratitude to Seth with a round of applause. “Before we go guys, we need to wish somebody a happy birthday,” said Seth.

Three ecstatic dancers gathered in the middle of the circle for a very awkward three-way hug as we sung happy birthday to them. This epitomised the evening: well intentioned, a tad overdone and just the right amount of bizarre.

At this point I thought the strangeness was surely over, but I was proven wrong when self-professed energy-healer Mike, 25, invited me to a cuddle club on the way out.

“It’s a space where you come and practice boundaries but also connect with other people. It’s really incredible, you should come along next week,” he said.

The sessions are led by somatic sexologist Stella Anna Sonnenbaum, whose website offers a free “five-minute orgasmic body scan”. I might have opened my mind to the powers of ecstatic dance, but that’s probably my spiritual limit. I’ll have to respectfully decline.