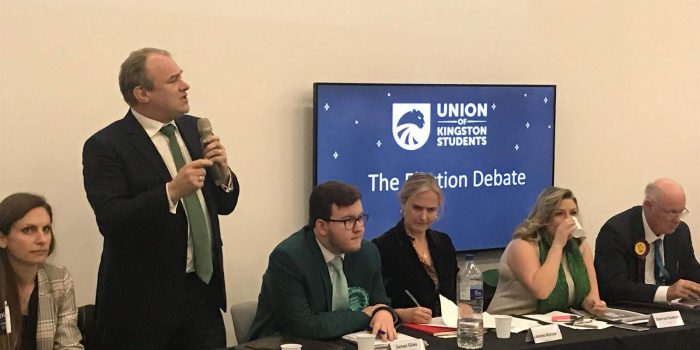 Kingston’s general election candidates went head-to-head this Tuesday in a passionate debate, hosted by the Union of Kingston Students.

The event, which was book-ended by a plea to register to vote before the midnight deadline, gave students and locals an opportunity to see their election candidates up close.

Giles said: “It’s really important to have events like these. Something like this lets people make their own minds up.”

Although all candidates were received relatively well, Green Party’s Sharon Sumner was the standout, getting loud cheers as she emphatically responded to Glencross’s controversial remarks about abortion.

“I thought everyone put on a really strong performance,” said Sumner.

A back-and-forth between Davey and Giles over the Cambridge Road Estate regeneration was the most heated moment of the debate.

Davey glanced in the direction of Giles when he said “certain people” had tried to prevent the planned regeneration of the estate. Giles responded that he thought residents should be given other options.

The audience asked questions about foreign policy, Brexit and tuition fees which candidates often answered by referring to the their respective manifestos.

After the event, Sharron Sumner said: “I was disappointed that the climate didn’t come up more. I really expected more questions on the climate.”

Ed Davey shared this sentiment: “I’d have liked to have seen an awful lot more on climate change,” he said.

Similar debates are set to take place in the Richmond Park and Putney constituencies on December 3 and December 10 respectively.