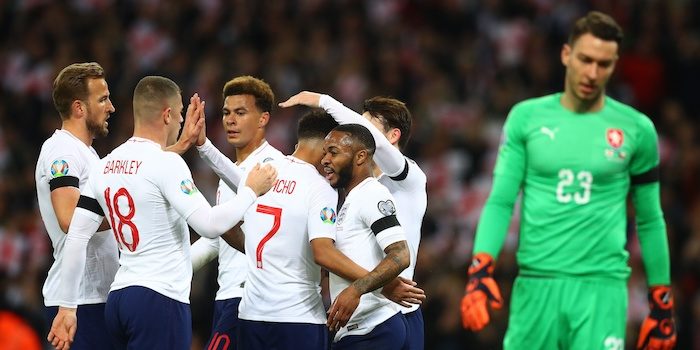 What a difference a year can make. Raheem Sterling was England’s key player on Friday as they dismantled the Czech Republic in a comfortable 5-0 victory at Wembley.

Sterling, who has been in terrific form for his club Manchester City, was a constant threat with his pace and perfectly timed runs. And it appears he has finally added finishing to his game – grabbing his first hat-trick in a red and white shirt.

Less than a year ago, Sterling was being slammed by pundits and fans over his World Cup performances. To add to that, his name was constantly in the headlines for all the wrong reasons.

In the post-match press conference, England manager Gareth Southgate, said: “Raheem is in a really confident moment on and off the field. He’s so mature and comfortable in himself.

“I’m so delighted he got the reaction he did from the crowd because we can’t hide from the fact he’s had difficult moments with England. He’s turned that full circle.”

The manager was also impressed by the team’s overall performance on the night.

England started with two holding midfielders, which contributed to a slow and cagey start.

However, an injury to Eric Dier in the 15th minute forced a change and Southgate opted to bring on a more attacking replacement in Ross Barkley. This freed England from their shackles.

This paid dividends in the 23rd minute when Sterling sprinted into the box and got to the end of an inviting low cross from Jadon Sancho. He had to stretch, but from three yards, there was no missing.

England grew in confidence after the opener and started knocking on the door even more.

The Czech Republic began to retreat, and for the rest of the first half, their whole team appeared to suffer from altitude sickness – keeping entirely within their own half.

Just ahead of the break, Sterling managed to wiggle his way into the box and was rugby tackled by two of the Czech centre-backs just as he was about to pull the trigger. The referee pointed to the spot and Harry Kane stepped up and did what he always does – score.

The away side came out with a new impetus in the second half. They tried to get forward a little more, but even when they did, they lacked the numbers and quality to make England pay.

As for their defence, the desire not to concede any further goals descended into preventing the game from flowing. They committed 11 fouls and picked up 2 yellow cards over the 90 minutes.

Just after the hour mark, Sterling was gifted a chance in front of goal after some pinball-like clearances from the opposition defence. He had to spin around and strike with his weaker foot but was still able to beat the keeper for his second of the night.

Not long after that, Ross Barkley dribbled unopposed into the final third of the pitch before switching it wide to Sterling. He decided to go for glory. A heavy deflection off a defender completely changed the trajectory of the ball – giving the keeper no chance.

Southgate decided it was job done for the winger and substituted Sterling for 18-year old England debutant Hudson Odoi.

At 4-0 down, the Czech Republic decided to try and win back some pride by focusing all their attention on the attack. Again, nothing transpired.

In the final 10 minutes, Odoi got into a near identical position to Sterling on his final goal. He drilled it low and the keeper managed to parry it out. But in a calamitous and comical fashion – the defender panicked and shot it straight back into an empty net.

The Czech Republic players must have been relieved to hear the final whistle.

As for England, they can use this performance as a springboard for the rest of the qualifiers and even next year’s Euro finals.

The only problem is that Southgate has just given himself a massive headache in terms of deciding his first team.