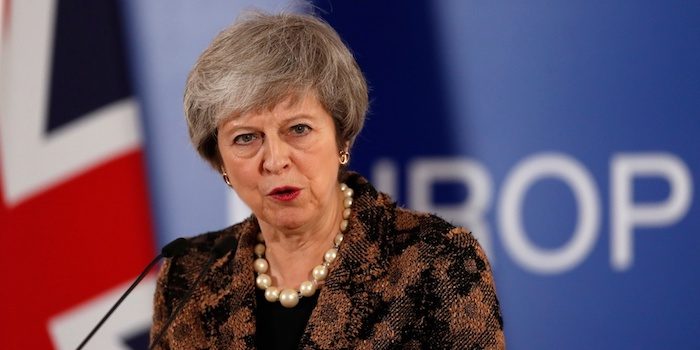 Theresa May fails to get further concessions from the EU. Photo by Rex Features

With only a week remaining until the meaningful vote and no further concessions from the EU on the horizon, it’s clear Theresa May needs to do something remarkable to save her Brexit deal.

In her New Year’s message, May tried diplomacy by urging MPs to unite in the spirit of entering “a new chapter”. But over the weekend, she hinted at holding multiple votes on her deal if the first gets rejected by Parliament.

Whatever the message may be, one thing is clear – her position hasn’t changed. The prime minister has repeatedly said that the only choices for leaving are her way or the highway (a no-deal outcome).

Although other options do still exist, even at this late stage, all of them seem to be unworkable or undesirable.

Call for a people’s vote

We all know how the conversation about a second referendum goes. One side makes the point that it is necessary as Parliament is at an impasse. Also, it’s not really a ‘second referendum’ as this will instead be a vote on the type of Brexit we have. The other side usually argues that this is undemocratic and snidely asks – if you win, what happens next…best of three?

Firstly, neither of the two main parties back a second referendum as their official position. Clearly, both are afraid of alienating all those who voted to leave.

Secondly, what to put on the ballot paper would be a point of contention in itself.

Finally, according to a poll published last month by Channel 4, a new referendum would see the country vote to stay by a majority of 54 per cent to 46 per cent. If a second referendum ultimately overturns the first, then what we’ve seen so far may just be a side note in the history books.

Ask the EU for an extension

The transition period is currently set to come into force on 29 March 2019. The EU has made it clear that there is no more negotiating to be done and the PM has already spent the previous 20 months building the current deal. An extension would only be useful in trying to renegotiate a completely new deal, in which case a new leader would be called for. This is something that the EU has expressed it has little patience for. However, this option would be required if a second referendum or general election were to be called, as they would take time to organise. 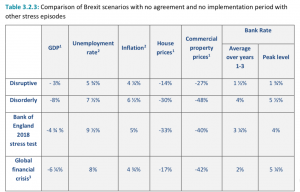 This Kamikaze option is the one being pushed by the European Research Group (ERG), a faction of pro-Brexit Tory backbenchers led by Jacob Rees-Mogg. The Bank of England has predicted that this scenario (a disorderly Brexit) would cause more harm to the UK’s economy than the financial crash of 2008. According to its report, there could be an eight per cent fall in GDP. Also, the value of the pound could plunge by 25 per cent while property values could tank by almost a third.

MPs, for the most part, want to avoid this outcome. However, they don’t accept May’s deal as the lesser of two evils. They are holding out for something better – a third option. The problem is that the PM doesn’t recognise a third option, and if she ultimately falls, the vacuum left behind would gift power to the ERG.

Proceed with the proposed deal

The UK and the EU are yet to see eye to eye on the post-Brexit border arrangement between Ireland and Northern Ireland. Both sides have committed to avoiding a hard border outcome and have thus devised a backstop (safety net) provision.

Here, Northern Ireland would remain subject to single market rules while the rest of the UK would stay within the customs union. This would continue until both sides agree on a permanent solution.

This deal also allows EU citizens living in the UK (for more than five years) to apply for settled status, giving them an indefinite right to stay.

Finally, the UK would remain subject to European Court of Justice rulings. However, the UK would no longer have a seat at the table to influence legislation.

As Tony Blair and many others have said, this arrangement, therefore, does very little to please the 52 per cent who voted leave or the 48 per cent who voted stay. Yet, without realising, they make the perfect argument for this option. If a compromise can be found that doesn’t involve having winners and losers, then surely that should be considered a good option. After all, the result in the end was marginal.

Furthermore, simply catering to Leave voters and pursuing a hard Brexit (leaving the single market and customs union), would, according to the International Monetary Fund (IMF), jeopardise growth and incomes even further. In contrast, not delivering any sort of Brexit would cause millions of people to feel disaffected and cheated by the establishment. Several politicians, including former Tory minister Iain Duncan Smith, have warned that this could tip into civil unrest.

In other words, a hard Brexit is too hot, no Brexit is too cold and Theresa May’s Brexit deal is just right (under the circumstances).