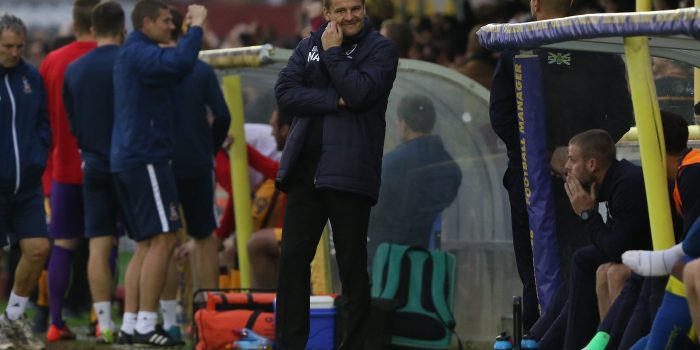 AFC Wimbledon’s unbeaten eight-game streak came to an end on Saturday, after a brace from Bradford’s James Hanson enabled his side to complete a spirited comeback.

The Dons went into the game with high spirits, having won consecutive away league matches last week. However, Neal Ardley’s side got off to the worst possible start in front of a packed stadium when Jordy Hiwula’s deflected shot wrong-footed James Shea and ended up in the back of the net.

Wimbledon upped their urgency levels and equalised in the 18th minute. For the third game in a row the Dons scored from a set-piece, this time a free-kick. George Francomb picked out Tom Elliot with a good cross and the Dons number 9 smashed the ball into the roof of the net, beating a bewildered Colin Doyle at the near post.

Ardley’s side carried the search for that winning goal into the second half and went close after Lyle Taylor’s low cross flashed across the face of goal with no one on hand to tap the ball in. By that point the Dons looked the likeliest to find a breakthrough in what was an open encounter.

The hosts grabbed their chance to go in front when Jake Reeves was brought down inside the box after a lung-bursting run. Taylor made no mistake with the penalty, drilling his shot low into the corner with Doyle going the wrong way.

Wimbledon did not hold on to their lead for long. Twelve minutes from time referee Tim Robinson awarded a penalty to the visitors following a scramble in Shea’s box, which resulted in Matthew Kilgallon going down. Hanson stepped up and placed his shot just above Shea’s outstretched arm for his first goal of the season.

The game settled down after the equalising goal and just as it was starting to look like both sides were happy to settle for a point, Hanson struck again, deep into injury time. Stephen Darby’s weighed cross found Bradford’s striker near the penalty spot and Hanson’s headed effort proved out of reach for Shea. The hosts nearly grabbed a point seconds from time, but Tyrone Barnett’s header couldn’t match that of his counterpart.