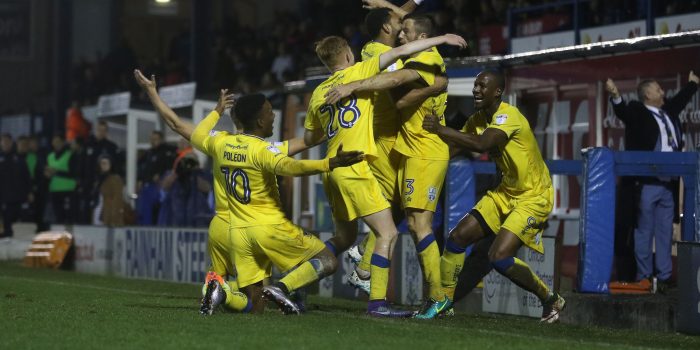 AFC Wimbledon will be aiming to make it eight league games unbeaten on Saturday when they visit Peterborough.

Neal Ardley’s side will arrive at Peterborough on the back of a hard-fought mid-week win over Bury – a win which elevated the Dons to ninth place in the table.

It also extended their undefeated league run to seven matches. Wimbledon have only lost one game out of the last 11.

Parrett reflected on the mood in the camp on Wednesday following the win over Bury: “The start of the season was a wake-up call for us. We had to look at ourselves as individuals and as a team. We had a good meeting and I think it has worked. Everyone is pulling in the same direction now and fighting for each other. That’s the main thing now.”

Now Ardley’s side is facing Peterborough, who inflicted misery on the Dons in the League cup on August 9, beating the Dons 3-2. That game is still fresh in the players’ memory – and they’ll be hoping to right the wrongs of their last meeting. If they succeed, the Dons will leapfrog Peterborough in the table – and there’s no reason they shouldn’t.

The team is clearly riding on a wave of confidence, and will be hoping to make it three away wins in a row on Saturday.

The returning George Francomb and Tom Beere will provide the Dons with a boost. First-team coach Simon Bassey said on Thursday: “We welcome a couple of other players back. George has been back in training all week and Tom is available as well. They will come into our thinking for the squad on Saturday.”

That leaves Sean Kelly as the only absentee. Having as full a squad as possible at this stage will prove pivotal in the coming weeks, with the Dons playing eight further games before the end of November.

What will be just as crucial is for the players to keep their feet on the ground – something Simon acknowledged on Thursday in the interview to the official website: “We’ve had a great run away from home and long may that continue. This league is tough though and there will be some defeats around the corner, we know that. We will have to shake ourselves down and go again.”