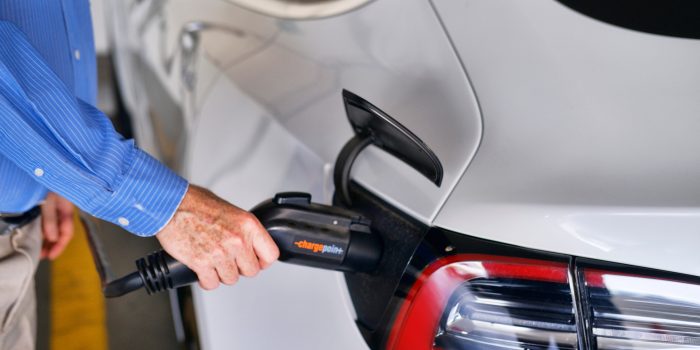 Charging points throughout Kingston will ensure a smooth ride for all electric cars. Picture: Shutterstock

Kingston Council has promised to deliver at least 100 charging points for electrical vehicles by 2022 in a bid to tackle the climate emergency announced last April.

The promise includes 25 rapid chargers and 50 lamp column charging points which allow electric car owners to charge their vehicles by plugging them into street lamps.

The ground-breaking technology developed by German tech company Ubitricity has already been rolled out in other parts of London such as Richmond and Twickenham, costing £1,000 to convert each street lamp into a nifty charging point.

A spokesperson for the council said: “We are committed to reducing air pollution in Kingston and want to make it as easy as possible to travel through the borough in environmentally friendly ways, which is why we are planning to install the new electric vehicle charging points.”

The move comes just weeks after the council revealed its plan to spend a whopping £4.72 million on improving Kingston’s transport network as the £32 million lottery funded Go Cycle programme’s next stage was given the go-ahead by committee members of Kingston Local Implementation Plan.

However, the council’s efforts to encourage the use of electric vehicles has not been approved by all its members without a few caveats.

“Although I welcome the plan to roll out electric charging points, especially rapid chargers, we shouldn’t lose sight of the reality of how we need to tackle the climate emergency,” said Green councillor Sharon Sumner.

“All car journeys have an environmental impact, even those taken in electrical vehicles.

“Other solutions like work-based levies and a Kingston ultra-low emission zone could encourage able-bodied residents to rethink their dependence on car trips, which we need to reduce by 40 per cent.

“When considering climate change it’s very easy to agree targets like these but much harder to agree to more solid actions.”

Electric vehicles work by using energy stored in a large battery to power the car’s engine or alternatively in hybrid models a smaller batter assists the main engine which is fuelled by diesel or petrol. According to manufacturer KIA, electric cars can save drivers up to a third on their standard fuel expenses and some models even boast emission free transport.

The council hopes the delivery of the charging points will improve Kingston’s air quality, as well as pave the way to a cleaner, greener borough.

Despite having previously ranked joint last in London in terms of its climate friendliness by environmental charity Friends of the Earth, the step towards more sustainable travel has pleased the protest group Extinction Rebellion, members of whom recently doused themselves in oil outside Surrey County Hall in a shocking demonstration against the council’s approval of an oil drilling contract.

A spokesperson for Extinction Rebellion said: “By bringing in 50 charging posts this year at lamp posts the council will find they can soon set their set sights far higher and bring in even more.

“We’re glad the council are asking local people if they want to request a charging point and would encourage everyone to make their voices heard.
“We have to work together to make fundamental changes to our travel habits, and do so swiftly. The time to act decisively is now.”