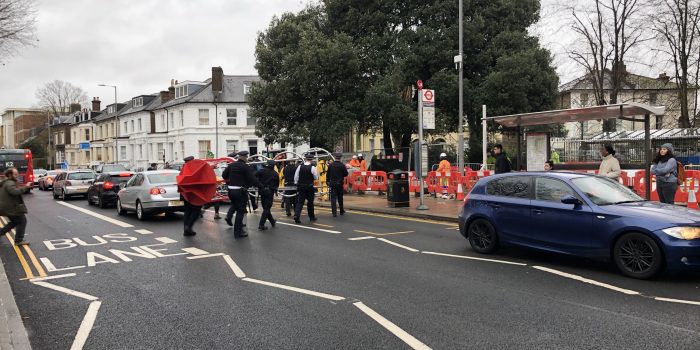 Extinction Rebellion members pored oil over themselves outside Surrey County Hall on Tuesday in protest at the council’s “breath-taking hypocrisy” after it approved a fracking contract.

The 30 protesters claimed that the decision made three months ago to grant UKOG planning permission for four new oil wells, as well as a 25-year licence to drill at Horse Hill in Horley undermined the council’s preceding declaration of a climate emergency in April.

“We are here to point out the breathtaking hypocrisy of their words and their deeds,” said Extinction Rebellion member Carol Foussat.

The protest coincided with other members locking themselves to the gates at the Horse Hill drill site this morning.

Protester Sarah Lyst said: “As we were trying to put the lightship up the police became very physical, and one lady fell to floor… it was getting very aggressive.”

Some members of the climate group came dressed in bright yellow sailor coats whilst others waved green banners titled “Tell the Truth!”.

Protesters disbanded at around 2.00pm following a final succession of enthusiastic chanting and hugging.