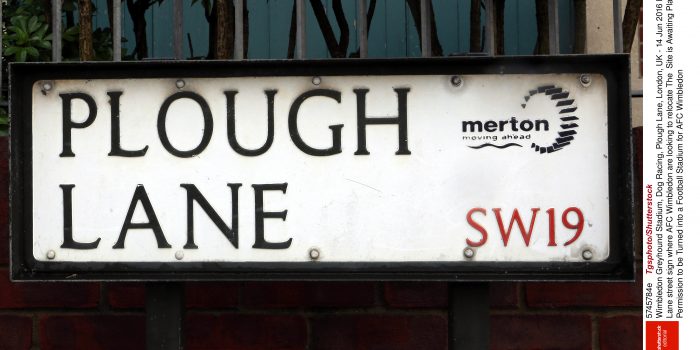 AFC Wimbledon are still trying to raise the funding to return to their home at Plough Lane Picture: Tasphoto/Shutterstock

The owners of  AFC Wimbledon, The Dons Trust, have less than 36 hours left to raise the remaining £1.2m needed for a fairytale return to their spiritual home in Plough Lane.

Since the club revealed an £11m cash shortfall in the project last year, the trust has managed to raise more than £3.8m by selling club bonds to fans and investors. However, it needs to raise a further £1.2m to reach a target of £5m by the club’s deadline tomorrow.

Meeting the deadline is vital for the club’s return to Plough Lane, with the funds potentially allowing the club to proceed into negotiations over a construction contract.

Xavier Wiggins, a member of the Dons Trust, said: “By putting money into the bond, you’re helping to make this story continue, you’re getting a piece of history.

“If you think of the club, what we’ve been through and what we’ve achieved after the Milton Keynes debacle, if you’d have told us we could recreate Wimbledon and then go home to Plough Lane… well we believed it, but it’s a pretty big story.”

The Taylor report was commissioned in 1990 to investigate the causes of the Hillsborough disaster in April the previous year, and recommended the introduction of new safety measures including mandatory seating at football grounds.

It was deemed too costly at the time to renovate Plough Lane, and Wimbledon FC were left looking for a new home, with a ground share with Crystal Palace and even a potential move to Dublin reportedly considered.

The owners of Wimbledon FC eventually moved the club to Milton Keynes in 2003, and in response the majority of the club’s fans set up a breakaway club called AFC Wimbledon. The original Wimbledon FC was then dissolved and renamed the Milton Keynes Dons or ‘MK Dons’.

Having earned successive promotions from the Combined Counties League back into The Football League, AFC Wimbledon were granted planning permission to build on the site of the old ground back in 2017, but it was announced last year that the club needs an additional £11m in order to complete the project.

On the pitch results haven’t helped. AFC Wimbledon have struggled this season, sitting one place above the relegation zone in 20th place, albeit with a six point gap to 21st placed Tranmere.

The deadline this Friday

Wiggins refused to be drawn on any future plans beyond Friday though, with the focus remaining on the deadline.

“We’re focused on this deadline on Friday, we want to sign the new construction contract. We’ve got tunnel vision, all we’re focused on is that Friday deadline,” he said.

The club released new pictures of the Plough Lane site on Wednesday alongside a statement encouraging fans to get behind the project and take part in the cash-raising scheme.

“It is critical to have raised sufficient funding to sign the next phase of the stadium development in mid-February, so the sooner you can sign up, the better. The initial bond offering is scheduled to close on 14th February,” the statement said.

Bonds are available on five, ten and twenty year terms, with investors able to choose their own interest rates ranging from 0-4% with a minimum investment of £1,000.

Wiggins was keen to point out that fans of other clubs had also bought bonds and thanked those that had contributed so far.

“This hasn’t just been Wimbledon fans, it’s been the wider football family. It’s been quite humbling to be a part of,” he said.

As of Thursday afternoon, the club has raised £3.8m of its £5m target.

Bonds are available to be purchased via the Plough Lane bond website.