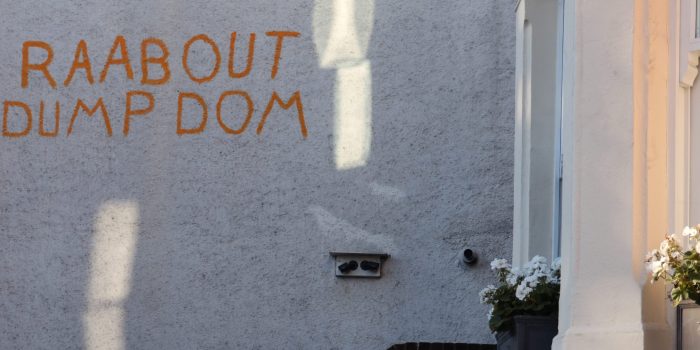 An East Molesey resident has used the side of his house to convey one message: get Conservative MP Dominic Raab de-seated in the Esher and Walton constituency.

The sign which reads “Raab Out, Dump Dom” in large orange letters is situated on the side of the house that Howard Bissell, 71, has lived in for the last 40 years.

“Politicians that go against their constituents can’t expect them to vote for him next time round,” said Bissell.

“He was Brexit minister and he didn’t exactly cover himself with glory.”

Bissell laid the blame for Raab’s falling popularity at Brexit’s door, adding that with 62 per cent of constituents voting to remain, he couldn’t expect local support.

However, he also made mention of his failure as housing minister to start any housing projects, as well as his lack of support for Harry Dunn’s parents.

Raab, Bissell said, said the cost of the average affordable house was £400,000.

“Basically if you earn less than £80,000 a year then you don’t deserve anywhere to live, which is a bit out of touch,” he said.

Bissell has received a variety of responses to his sign. He said one community officer was red-faced and apologetic.

The authorities had received an anonymous complaint but a bemused Bissell said: “The officer said to me we’re not going to ask you to take it down, we just wanted to check it was all your own work and not that of some random graffiti artist.”

When asked if he had received any responses from any of the local parties running for office Bissell said that a Liberal Democrat representative had come to see him but that the Tories had been very absent in the local area in the run up to the election.

“I’ll take it down after the election,” said Bissell, “so long as it’s not raining”.