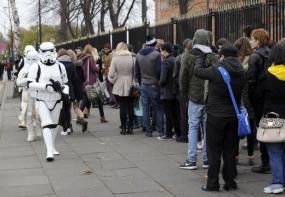 Georgie Anderson, from Kent, was delighted to succeed in the first screening and had her second audition on Saturday evening.

Describing her experience, she said: “I got directed inside to meet a top casting director who asked me a few questions. I was given a time slot with a script to learn for then.

“When I came back I got taken into a big room with about 30 others waiting to be called. They looked like models – literally! I was incredibly nervous.”

The first stage, which proved to be the last for most of the aspiring stars, consisted of filling in a form attached with a headshot and being assessed by a casting team.

Nevertheless, many were in positive spirits despite not progressing to the next stage.

Jadi-Anne Bent, who had queued for six hours, said: “My day was great and I don’t regret it.  It was a great experience to have partaken in even though it cost me a bit of travel.”

Star Wars Episode VII is scheduled to begin shooting at Pinewood Studios in spring 2014 and is due for release in December 2015.

The new film will follow chronologically from 1983’s Episode VI: Return of the Jedi, and will be directed by JJ Abrams, who has directed two Star Trek films in recent years.