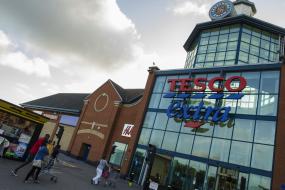 An angry crowd of Tolworth residents attended a planning meeting of the Surbiton neighbourhood committee to express their opposition to a proposed new Tesco megastore.

The site that is subject to Tesco‘s application is located to the south-east of the Tolworth roundabout adjoining the A3 trunk road and Kingston Road.

John Talag, a Tolworth resident, said he was worried about the impact on traffic and air pollution from another megastore.

The current estimation is that the store will add another 5,000 car movements a day to the area.

He said: “This is a very big and busy junction – It is the main road out of Kingston.

"It‘s already very congested at times and despite what Tesco say it‘s not a place where you pop in for milk.

"You will load up your car and drive off and you will add to the congestion and the pollution.

"It‘s just crazy. On the safety and the traffic records I can‘t see how the development committee can actually pass this."

Tesco bought the land from the council in 2002 for £10m. It was a private sale so there were no other bidders for the 7.61 hectare site.

Ever since, the supermarket chain have tried to get plans for a new store passed by Kingston Council but they have been rejected each time.

The whole development concept for the site does also include plans for a hotel, a restaurant, a small area reserved for new housing, and 231 parking spaces.

The community is now worried that Tolworth will not be able to provide the resources that such an increase in people will bring. School places for example are already short.

Eileen Sullivan, from Tolworth Broadway, said: "I think it‘s time that we stop being held to ransom with this site. Let‘s just tell them to go away. Enough is enough."

Mrs Sullivan said that Tolworth is a "great community and has great schools" but that the children "won‘t be able to breath anymore" if there is a larger population.

Tesco also went from door to door to find supporters for the new supermarket as Alan Slade, a resident of Tolworth, remembers.

He said: "A girl came to my door last summer and told me they wanted to find out whether people are for or against the store.

"When I told her I actually opposed it she refused to write it down on her notepad.

"When I asked her why, she said they were only looking for people who support it."

Another resident said: "A school and a park, that‘s all we want there. We just don‘t want this development. Full stop!“

He received approving applause from almost everyone in the room.

The question to whether Tesco should be allowed to continue applying was also raised repeatedly.

According to the law, each and every planning application has to be considered on its own merits and there is no way of showing Tesco the door.

All present councillors backed the opinion of the Tolworth people. Without exception they rejected the idea of another Tesco megastore.

Cllr Liz Green pointed out another detail in the application. A comment in one of the letters of support, delivered by Tesco, said that the new store “will not result in greater traffic congestions in the area as local residents will use alternative means of transport, rather than using private transport".

As someone in the audience made a joke about jetpacks, Cllr Green said half laughing, half indignant: "I think the concept that everybody else has to get off the road because the store users want the road is not really fair on residents."

A decision by the Development Control Committee is expected on February 7.

You didn't get to say your piece at the planning meeting? Share your thoughts with us on Twitter @CourierKingston.