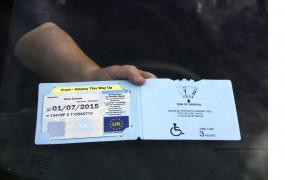 A Teddington pensioner  found guilty of using a fraudulent disabled parking permit has been fined over £300.

William Millar, 77, of Udney Park Road, Teddington, owned up to having used the photocopied Blue Badge when he appeared at the Lavender Hill Magistrates last week.

Blue Badges help those who are disabled or blind and ensures that they are able to park closer to their destinations.

During busy times of the day especially, having ownership of a Blue Badge for some people is the difference between them being able to go and do their food shopping or not.

Under the regulations which can be found on Gov.uk on how a badge is to be used, it states clearly that misuse of a Blue Badge is a criminal offence.

Regulations of the badge scheme also state that police officers, traffic wardens, parking attendants and civil enforcement officers have the right to inspect badges at any time to make sure there is no misuse.

The court heard that the fraudulent badge was spotted in May last year.

The badge was seen in a car in a loading bay on Fife Road, Kingston, with Millar inside the vehicle.

He had tried to assure the officer that the badge was obtained in Northern Ireland which later turned out to be untrue.

Enquiries were carried out to the Northern Ireland authorities, who said they did not issue Millar a badge at any time, and that the original badge belonged to a woman in 2007 who reported it lost/stolen in 2008.

Mr Millar later changed his story and told council officers that he had bought the badge for £70 and as far as he was aware the badge was legitimate.

Despite this, Millar was fined £110 and additionally ordered to pay a further £200 in costs and a £20 victim surcharge.