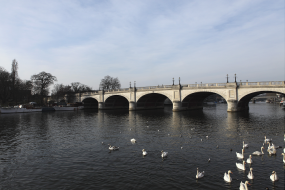 A 25ft holed vessel was found capsized in the Thames on Monday.

At 10:50 the Metropolitan Policing Unit were informed that the fibre glass boat was drifting towards London.

By 11:05 the RNLI had launched their lifeboat as there were worries that people may be on-board.

“Because no-one could say for definite if there had been anyone on-board we were asked to launch to search just in case.

“We arrived at Kingston Bridge but could see no sign of it.

“We spoke to an angler on the banks of the river and he said he’d seen it floating past at quite a rate.

“We then managed to track the boat down at Teddington Lock.”

The boat was found 200 metres from Kingston Bridge.

A spokesperson for MPS On The Water has confirmed that there was no one on-board and concluded that the boat had been empty.

The boat is now secured close to Kingston Bridge and awaits recovery.

The Environment Agency has been notified.