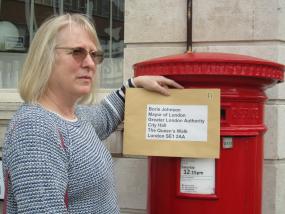 Boris Johnson has called plans for a new town at Chessington “crazy”.

The London Mayor addressed the concern of 70,000 new homes being built during People’s Question Time at Richard Challoner School, in Malden Manor, on Wednesday night.

He said: “There is this talk of a plan to build loads of homes in Chessington and as far as I understand there is no such plan that we know of.

“I want you to know I would not support building on green belt – that is not what we do.

“That’s not our approach at all – we think there are huge amounts of brownfield sites available and we are going for those.

“It’s totally crazy to be going for the green belt stuff now when there are so many fantastic prime brownfield sites.”

Earlier in the week, the Liberal Democrats in Kingston said they had been inundated with letters and emails from residents concerned about a new plan to build 70,000 homes on green belt land in Chessington.

The plan, drawn up by pressure group London First, hoped to create a new London suburb.

Liz Green, leader of Kingston Council, said: “These plans would more than double the number of homes in Kingston at a stroke.

“They’ve not been thought through and for the Deputy Mayor to give them his full backing is frankly terrifying for local residents, who will face years of disruption and see Kingston transformed beyond recognition.

“Local councillors are calling for an urgent meeting with the Mayor to discuss these plans and what powers he is going to use to push this development through.

“We’re launching a petition to ensure local people can have their say.”

While the Lib Dem councillors seem against the plan, Tricia Bamford, lead member for Housing, admitted that not enough homes have been delivered over the years.

She said: “We know both Labour and Conservative Mayors have failed to deliver enough housing in London, but these housing plans are divisive and frightening for Kingston residents.

“We can’t accommodate this number of homes in Kingston and protect our Green Belt – the Mayor should think again.”

Some residents in the area also came out against the idea of new homes, with some questioning how Kingston would viably accommodate the vast increase in population.

Sarbjit Athwal of Chessington, said: “Where are all the schools going to come from for all these new people?

“What about new roads, shops and supermarkets?

“Even if the development is smaller, a big chunk of our green belt will still be taken up with new supermarkets and roads.”

Matt Broadbent, of Malden Rushett, said: “Caving in to developers isn’t the answer to our housing crisis in London.

“Of course Berkley Homes or Westfield want a chunk of our green belt but that doesn’t mean we should give it to them.”

New housing plans in Kingston have become a bigger subject recently, with residents concerned about the lack of housing, but also whether there is enough land left to build on in the area.