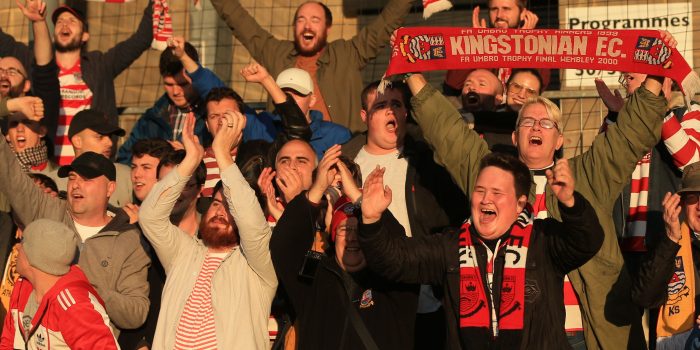 Kingstonian fans will be excited about the prospect of playing against a football league club Picture: Simon Roe, Shutterstock

The manager of local club Kingstonian FC said that they “won’t fear Macclesfield” and described the game as “winnable” ahead of the club’s first round FA cup tie against Macclesfield Town next Sunday.

The tie represents the first time that Kingstonian have made the first round proper since the 2000-2001 season when they were eliminated by Bristol City in the fourth round.

Speaking before the club’s 1-0 defeat to Bognor Regis last week, manager Hayden Bird said: “We will respect Macclesfield [but] we won’t fear them,”

“I’m pleased with the draw because it’s winnable.

“I don’t want to antagonise Macclesfield Town when I say that, but you have got to accept that if you get Sunderland away or if you get Portsmouth away then it’s a plum tie.”

Bird remained upbeat about the team’s form going into the game.

He said: “The players are in good form, they’re continuing to improve [and] I would hope and expect to see some really good things here.”

The team have been on a fantastic run in the cup this season, defeating the Walton Casuals, March Town United, Weston-Super-Mare and Dartford on their way to the first round proper.

Kingstonian defender Simon Cooper was equally optimistic about the team’s chances, saying: “It’s a good opportunity for the club and hopefully we can do it.

“There’s no pressure on us, we’ve just got to go there and play our football.”

The team will be anxious to build on the cup run with the club languishing in 16th place in the league this season.

Bird said: “The goal is ultimately to restore Kingstonian to the club that it was: one of the biggest clubs in Surrey.”

The attendance of 850 people for the 4th qualifying round match against Dartford on October 19th was the biggest of the season so far and an even larger crowd is expected at the game against Macclesfield.

The match is scheduled for next Sunday November 10th and tickets will be available at Macclesfield’s club ticket office on matchday.