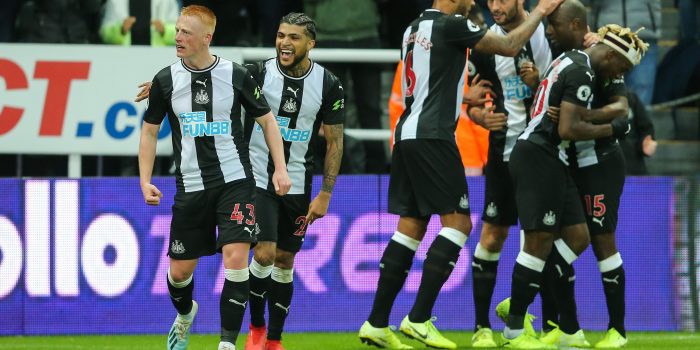 Newcastle United earned a 1-0 victory over Man United thanks to a superb low-driven strike from Matty Longstaff on his premier league debut.

It was a cagey clash between two struggling sides and the match epitomised the current state of the two clubs with spells of sloppy play and very few clear-cut chances.

However, the emergence of 19-year-old Matty Longstaff, who is the younger brother of teammate Sean, will certainly encourage Newcastle fans.

With only three shots on target, the best chance for the visitors came from a corner in the last minute of the first half. Harry Maguire found himself unmarked in the box, but somehow could not convert from four yards and headed wide.

Newcastle may have felt the visitors were lucky to start the second half with 11 men, after Scott Mctominay’s high challenge led to a yellow following a VAR check.

The home fans were encouraged in the 56th minute by the introduction of Andy Carroll, who came close to scoring a few minutes later when he got on the end of a Matty Longstaff cross but headed over the crossbar.

Manchester United were prevented a goal from thanks to a brilliant Schar clearance, which stopped a Marcus Rashford tap-in from a Daniel James cross.

The uninspiring match was all about one man: Matty Longstaff, and he found the net out of nowhere in the 70th minute.

Saint Maxim fed Jetro Willems after an impressive run from the halfway line, who then laid it off to Longstaff.

The 19-year-old showed great technique, striking the ball first time with a sweet low-driven hit from 25 yards for a sensational goal.

It was a poor, lacklustre performance from Manchester United, who once again failed to capitalise on their chances in front of goal.

They are now just two points off the relegation zone.

Meanwhile, a much needed three points means Newcastle United climb out of the bottom three into 16th place.