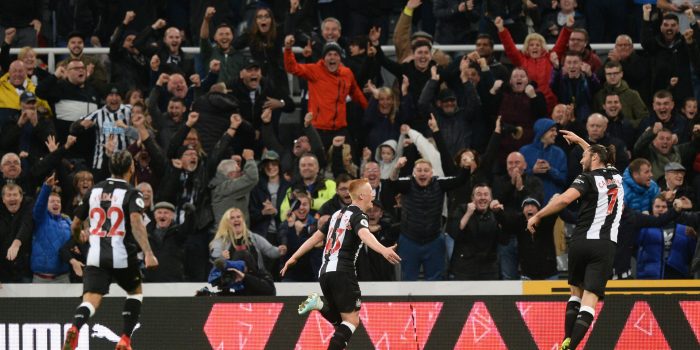 Longstaff made a dream debut for his boyhood club. Picture: Richard Lee/BPI/Shutterstock

Matty Longstaff marked a dream Premier League debut as he punished Manchester United and scored the only goal in a cagey 1-0 affair that lifted Steve Bruce’s Newcastle out of the relegation zone.

In an otherwise benign meeting of the two sides, 19-year-old Newcastle midfielder Matty Longstaff, brother of teammate Sean, brought St James’ Park to life on 72 minutes as he latched on to a Jetro Williams pass and drove the ball beneath goalkeeper David De Gea from 20 yards.

The sprightly youngster looked lively all along, delivering the game’s first meaningful chance on 28 minutes as he sent an exquisitely struck half-volley hurtling towards the United goal and clipped the crossbar.

Manchester United dominated possession but never really threatened, with perhaps their best chance coming on the stroke of half time as imperious centre-half Harry Maguire scuffed a header from point-blanc range following an Ashley Young corner.

Newcastle were far from dominant but remained disciplined throughout, maintaining a rigid backline and 4-3-2-1 formation and ultimately denying Ole Gunnar Solskjær’s men their first away win of the season.

Whilst the Red Devils remain in a lowly 12th place after their worst start to a league campaign in 30 years, Newcastle climb off the bottom places and into 16th  with their victory, recording their first home win of the season.