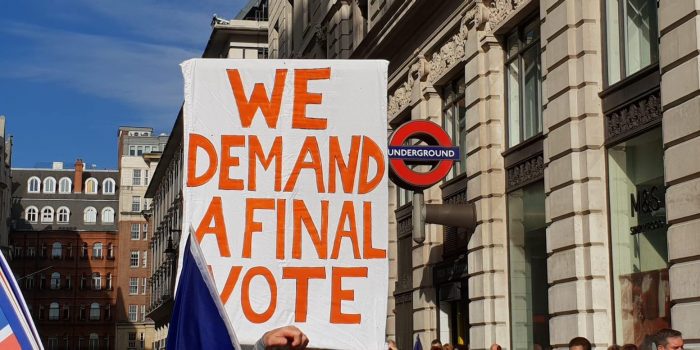 EU residents in the UK are outraged by the government’s plans on EU migration post-Brexit. Credits: Rebecca Deuchar.

EU citizens and their families will need to apply to the EU Settlement Scheme to continue living in the UK after 31 December 2020.

The video informed EU citizens currently living in the UK that they would have to apply for the scheme before June 2021 if they wished to stay. Although there are a few exceptions, this applies to children and those married to a British national, as well as relatives, spouses or civil partners to EU citizens. The applicants will need to prove their identity, residence status (and relationship with an EU citizen if they are from outside the UK).

What originally shocked twitter users was that adults and children would have to pay a £65 or a £32.50 fee, respectively. However, the government quickly backtracked on this fee, and the application process is now free of charge. Rightly so.

It only seems fair that if the British voted to leave the EU, then they should take responsibility for all the consequences that entails – including paying for administration fees caused by their own decision-making, especially as EU citizens in the UK did not have the right to voice their opinion in the 2016 referendum.

However, although the scheme’s efficiency and fairness is yet to be determined, it remains a privilege compared to non-EU immigrants who hardly have access to such an option. And soon, EU migrants will be faced with equal restrictions.

As bad as the scheme is, at least it gives a chance to EU citizens in the UK to be unaffected by Brexit post-June 2021. Those who fail to apply for the scheme, or wish to move here after June 2021, will face absolute rejection from the Home Office.

The government’s white paper on post-Brexit immigration proposed an outraging £30,000-minimum wage threshold for EU citizens who wish to move or stay in the UK from June 2021 on. Some professions, such as nursing, will be exempt.

This has already been in place for migrants outside the EU for years, and it just shows yet another level of British hypocrisy: earning more than what the average British citizen will ever earn, currently estimated at around £28,000 per year according to ONS figures, in order to have access to the same rights.

Non-EU families, torn by this measure, have been protesting for a while – to no avail. This demand is a manifestation of xenophobia, and of a preference for the upper middle-class immigrant, from the government.

Young graduates and low-skilled workers will see their opportunities cut short in the UK, and that leaves us to wonder what British citizen will be willing to work in low-skilled positions for the long-term when those jobs are so badly looked upon by the British public.

This also poses a challenge to businesses because that threshold means that they will need the funds to pay for it.

With the £30,000 threshold, businesses will either have to hire fewer EU citizens but more British ones, who may not possess the same skills; or hire less people but raise all wages to the threshold regardless of nationality to avoid salary inequalities and afford to put the measure in place.

One of the Three Olive Tree stall workers at Kingston Market said: “European workers will leave and there will be a shortage of staff.”

He added: “We import all of our olives, how is our business meant to survive if it becomes more expensive to import goods?”

What does it mean for EU students?

As for EU students, just like international ones, they will have to get a permission to study here. That raises questions as to the status of their university tuition fees, which is currently unclear.

Financially discriminating against foreign students who work almost twice as hard to earn their way into UK higher education, and highly benefit to the UK economy during their time of study, is one of the biggest mistakes the government could make.

It completely disregards the skills and knowledge they bring to universities while taking advantage of them financially as they pay much higher tuition fees because of their nationality.

If EU citizens were to pay as much as international ones because of Brexit, most would choose not to study here. This would represent a rather big intellectual loss for UK universities, which also are in financial debt.

EU citizens are now faced with a difficult decision, and need to consider whether staying in a country whose economy might fall upon its official exit of the EU is even worth the effort at all.

Those who wish to stay could also write to their MPs to urge the government to revise their post-Brexit immigration policy, and make it fair to non-EU citizens as well.