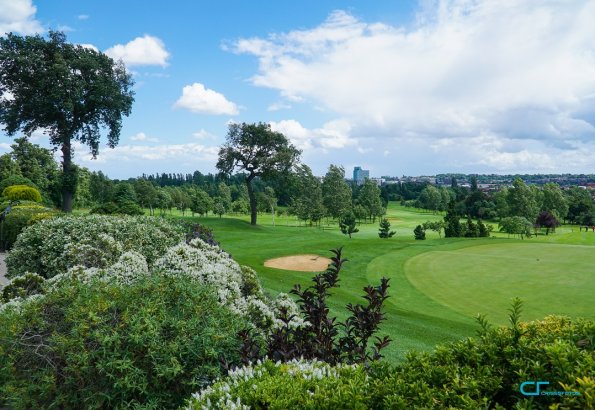 The 18th Green, view from the clubhouse at Sudbury GC. Photo by Guy Stacey

Golf’s problems have been well-documented in recent years. Participation in the UK has decreased 27 percent year on year for a decade, while a Tiger-shaped hole has been left unfilled at the pinnacle of the sport.

Indeed, 20 changes at the top of the rankings in the four years since Tiger Woods last called himself the best, only prove how brilliant he was to dominate as he did.

But could Golf England, the governing body for amateur golf, be beginning to see the green shoots of resurgence?

Tiger Woods has returned to the big-time with his first victory in five years, but more important were the results from Golf England’s club questionnaire. The most recent results show that golf could at last be adapting to the rigours of modern life.

In 2010, 60 per cent of clubs saw their membership declining with less than 20 per cent seeing an increase. Now in 2018, more clubs are growing than declining for the first time since the biennial questionnaire began. 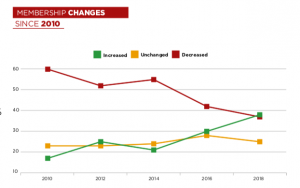 Golf Clubs are beginning to grow. Photo by Golf England

Abbie Lench, head of communications at Golf England, admits much of the promise has been down to simply “stating the obvious”.

“Some of that softer stuff that we don’t normally talk about, is definitely being seen to have a positive impact on membership.”

For those who love the sport, it is a painful admission that in large part, golf’s problems are self-inflicted. Lench frequently spoke about the negative “perception” of golf being a crucial barrier to overcome. The perception that golf is a game for old, white, (rude) men, has been hard to shake.

Infamous in this regard is the dress code. White socks, collared T-shirts and belts on the course; jacket, tie and no phones in the club house.

“It doesn’t need to be another barrier. I don’t ever go to the gym and get presented with a load of you mustn’t wear this type of lycra, it must be this length it must be this colour. You just wouldn’t get that,” she said.

But Lench believes progress is beginning to be made. And now Golf England has stats to back it up, with the more welcoming, flexible and relaxed clubs showing the way for the others.

“Golf has to take that attitude, let’s embrace everyone and make people feel like they’re welcome,” she said.

In West London, Sudbury Golf Club, is one of these clubs modernising to “buck the trend” as the general secretary, Guy Stacey, puts it.

Hidden away, not far from the North Circular, with stunning and surprising views of London’s skyline, Sudbury is begging to thrive once again as it approaches its 100thanniversary.

Isn’t it rather ridiculous to think that the future of golf in the UK could be down to simply being nice to new people? Stacey certainly thinks so, and he is proud to take advantage of clubs who fail to adapt.

“We had four new members, good players, who had been interviewed elsewhere, they had been accepted but they just didn’t like the vibe at the interview. So they called me up on the Monday, they joined.”

What had happened at the other club?

“They just said it was the interview, ‘do they really want us to be members?’ But, I try to be as open and as welcoming as possible.

Stacey is happy to push the club into the 21stCentury, despite a minority of opposition from within.

“There is a group of old people, longstanding members who want it to be this exclusive club, but we’re not living in that world anymore. So we try and be as friendly as we can and hope that we win them over,” he said.

It is noticeable at Sudbury, that while many members are old, the clientele are not simply white, male and upper-class. There is a diverse membership: Thai, Indian, Sri-Lankan and Black members alongside many working-class white members with chimney sweeps and retired bus drivers making up the heart of the club.

The cost and time that golf requires have often been cited as reasons behind the game’s sharp decline, and while Lench concedes that the days of members with money to burn aren’t queuing up to join, neither she nor Stacey believe that money is the biggest barrier to members. 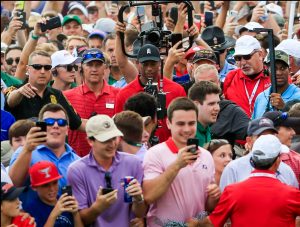 Tiger Woods engulfed by Fans as he won his first title in five years. Photo by RexFeatures

“We’ve noticed from those offering flexible membership that they are attracting a slightly younger demographic so that concept of offering different packages for different people’s needs is a big thing.” Lench adds.

They both know that more work needs to be done if golf is to thrive again. Stacey is chipping away at the “old farts” and Lench hopes all clubs can learn from those that are doing well.

It could be the start of a golden period for golf. Tiger is back, and so are his fans, the “Tiger effect” bringing the Golf Channel it’s best ever viewing figures last quarter, up 9% on last year.

The young stars of the game are ready to take him on, now it is up to the clubs to capitalise on the game becoming cool once more.