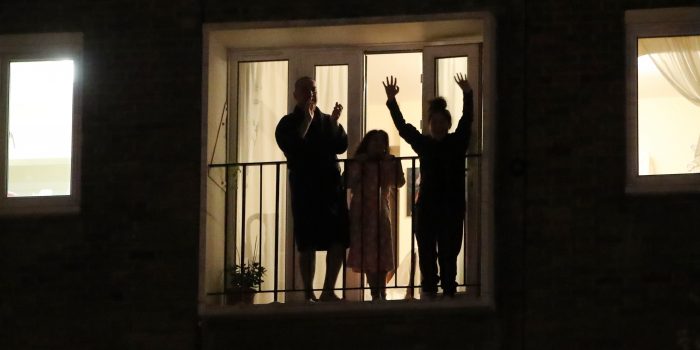 People at their homes clapped for NHS workers at 8pm on March 26th. Picture: RexFeatures

Kingston joined the rest of the country in the ‘Clap For Our Carers’ campaign, which saw people applauding the work of NHS staff from their doorsteps, windows and balconies.

The campaign, which gained traction on social media, was initially organized by 36-year-old Annemarie Plas, who lives in South London.

When asked what motivated her, the Dutch yoga teacher said to Radio Jackie: “I’m still in a lot of Dutch WhatsApp groups and I saw how amazing it looked over there.

“Then I looked at how other countries had done it and I thought ‘well I’m just going to do it and maybe see if the Brits are up for it as well’ – and they were!”

Plas, who resides in Streatham Hill, also said she wants to repeat the act every Thursday at 8pm.

“So this is just the beginning, I hope,” she said.

In the Kingston area, the spectacle was particularly notable on Cambridge Road Estate, where residents from all corners of the estate showed their appreciation in rapturous style.

A video showing an ambulance travelling down Upper Teddington Road to warm applause also received a great deal of attention of social media.

Following the nationwide salute, new NHS-inspired grafitti was put up at Fairfield Park in Kingston.

The grafitti advises the public to stay at home in order to save lives, as well as offering advice such as keeping two metres away from others.

Fairfields in #Kingston and saw this new #graffiti in support of #NHSheroes the day after the #clapforNHS. As I was taking photos a nice chap from #Kingstoncouncil said he had been sent to clean it off. He said he couldn't. #StayHomeSaveLives @KingstonHospNHS @JonTolleyTweets pic.twitter.com/Ys7RfBV5sV