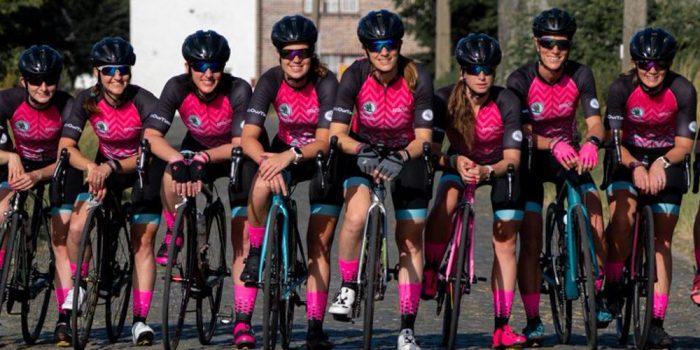 A group of female cyclists who rode the entire route of the men’s 2019 Tour de France told a Kingston audience about their epic journey over the summer.

In July the group named the InternationElles endured 21 days of gruelling cycling from Brussels all the way to Paris, which totalled to 3460 kilometres in distance and 54,000 metres in elevation.

The InternationElles are a group of ten amateur cyclists who have one common goal: to fight the inequality they feel exists in professional cycling.

More specifically they want to change the fact that since the 1970s, there has been no current female equivalent to the men’s Tour De France ride.

“We’re not asking for an exact version of the Men’s Tour De France, but it definitely should be a conversation to be had,” said Alex Chart, from Henley-on-Thames.

Whilst Egan Bernal of Columbia was cycling to glory in the men’s tour this July, the InternationElles were also hard at work and the group managed to reach the finish line at the Champs-Élysées 24 hours before their male counterparts.

Each of the 21 relentless stages was completed one day before the men’s peloton in order to “show what women are capable of”.

The women shared their experiences in front of a full house of cycling enthusiasts in the Norbiton Pub on Tuesday night. The Q&A style event was organised by BellaVelo – a women’s cycling community in South-West London, which meets up at Richmond Park every week and takes part in organised rides and social events.

“Ordinary women doing extraordinary things” is how presenter and member of BellaVelo Patricia Bacon described the group of women.

In the inaugural year of their tour this summer, they received significant media coverage from organisations including Reuters and The Times, as well as support from multiple Paralympic cycling champion Dame Sarah Storey, who has launched a cycling academy to help aspiring female riders.

The women appreciated the attention, which included being interviewed by Naga Munchetty live on BBC Breakfast, but they claim there is still plenty of work to do in order to achieve their goal.

“We have good contacts now and what’s positive for us is that the media are interested that we are going back again,” Chart said.

“What would be good is for us to have coverage and a story during the actual ride.

“This is our time to be heard and to be seen.”

It was not just the on-bike struggles that the women had to overcome: as well as cycling in the soaring heat all day, they had to sort out their own washing and catering as well putting up short stays in less than ideal accommodation.

Although a dedicated crew was on hand to assist the riders and transport them to and from long each start point, the InternationalElles’ support does not compare to the kitted out team trucks found on the professional male tour.

With just two rest days over the course of the three weeks, the women described some of the mental as well as physical battles they suffered.

“There were moments when I wanted to stop and I thought I was done but we knew we would regret it…probably for the rest our lives,” said Helen Sharp.

In the cosy upstairs room of the Norbiton pub, the women reflected on some of the toughest sleeps of their lives, during which their exhausted bodies had to endure boiling temperatures without any air conditioning.

“I would have a jug of water next to me for drinking and another one for chucking over myself to cool down,” said Sharp.

“Then I would check the time and realise that I’d only have a couple hours left to sleep before waking up at the crack of dawn.”

Unlike the men who have their nutritional needs met on the tour, managing to eat well was also struggle for the group throughout their three-week journey and finding a good meal for the evening was “nigh-on impossible.”

“In a way cycling was the easy bit,” claims Helen Bridgeman, who plans to take on the tour once again next year.

“We have to do it again as there is still work to do. It is disheartening but it will just drive us on.”

Given the immense togetherness and collective drive in the group, it is hard to believe that the women did not actually know each other before the trip started.

“It bonds you in a way nothing else does and we are definitely bonded for life now.”

The InternationElles’ escapade may just be the beginning of an arduous fight for both the group and female cycling as a whole, but it has certainly triggered a long overdue topic of discussion and inspired the cycling community of Kingston.