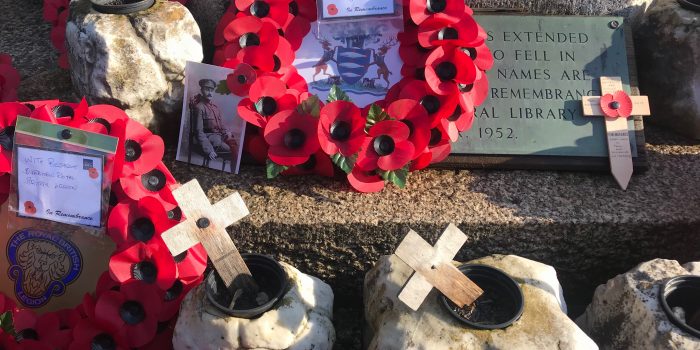 People of all ages came together to commemorate the contribution of British and Commonwealth service members who have fought for their country since the First World War.

Amongst those who attended local services were contingents of the Royal Star and Garter, Scout and Guide groups and the mayor of Kingston. 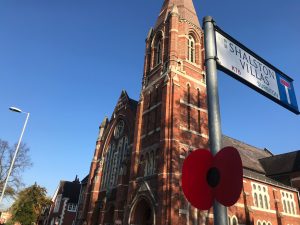 In Surbiton, a service was held at the War Memorial on Eden Road followed by a March Past in Ewell Road.

During the service, an English soldier who was injured during the Afghanistan conflict read out a poem he had written reflecting on the impacts of war.

Christine Smith attended the Surbiton service with her father and a contingent from Surbiton’s Royal Star and Garter Home.

She said: “My father never got any medals and it was pleasing that he was presented with a special badge commemorating attendance at the service.

“I loved hearing the Last Post again, hearing a poem read out and seeing a marching band”.

A service was held in Kingston at 10:45 followed by a March Past outside the Guildhall.

Kingston pays respects to those who gave their lives for their nation, with services taking place across the borough.#RemembranceDay #KingstonRemembers pic.twitter.com/GDauDgXxzR

Paul Hillier, previously from Kingston, lost his great-grandfather Alfred Charles Beauchamp who was in the East Surrey Regiment and fought at the Somme.

Hillier said: “I believe it is important to remember those who fought and died; if we don’t then we run the risk of history repeating itself.

“We have to remember why they died and what they fought for.

“If not, then it was all for nothing.”

Locals gathered at the New Malden War Memorial for a service at 9:30 – a traditionally early start time.

Leader of Kingston and Malden Scout and Guide Band Alison Eggitt attended services in New Malden and Kingston and performed with the band at both.

She said: “It is very important to remember the sacrifices made by so many in conflicts and military service around the world.”

New-Malden resident Sara Anne O’Keefe lost her uncle, a paratrooper born in Kingston, at the Battle of Arnhem in WW2.

She said: “My uncle was a talented harmonica player, just like my son is.

“Family connections like that really bring the loss home.

We remember my uncle every remembrance Sunday.” 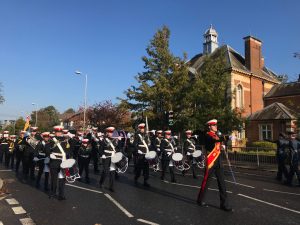 In Chessington, a service held at the War Memorial was followed by another service in the Parish Church of St Mary the Virgin on Church Lane.

Thames Ditton resident Richi Singh said: “My grandfather-in-law fought in World War I as an Indian soldier in the British Army.

“We attend Remembrance Day for him, and many such unsung, forgotten soldiers.”