The project is part of a nationwide scheme to remember Jewish refugees who were displaced across Central Europe during the Second World War. In partnership with the Association of Jewish Refugees’ (AJR), the council marked Winter’s life with the planting an oak on Queen’s Promenade in Kingston.

Winter’s tree is one of AJR’ ’80 Trees for 80 Years’, a campaign commemorating eight decades since the Holocaust.

Kingston and Surbiton MP Ed Davey attended the ceremony calling for the recognition of “the amazing contribution of Jewish refugees to Britain”.

The Liberal Democrat member of parliament made reference to refugees fleeing Russian’s invasion of Ukraine, tweeting that: “We must be true to our traditions, and warmly welcome Ukrainian refugees to our country.”

Winter ran her own cafe in London for many years before moving to a Thames Ditton care home in 1998. ‘Patisserie Vienna’ was known for its popularity amongst fellow refugees following conflict in World War Two.

Leader of Kingston Council Andreas Kirsch thanked attendees of the tree planting ceremony. He said: “[The oak is] a symbol of the proud roots that these families have laid down in this country, and the rich contribution they have made to our communities…We must learn from past to form a better future together.”

CEO of the Association of Jewish Refugees Michael Newman OBE said he hoped the tree would inspire generations to come and provide a habitat for local wildlife.

He said: “As well as helping to mark the heritage of our members and a place of historical interest associated with them, the planting of this tree enables the AJR to give back to and create a living legacy within the country that became home to the Jewish refugees.”

Winter died in 2000, leaving behind grandchildren and great-grandchildren who continue to live in Thames Ditton. 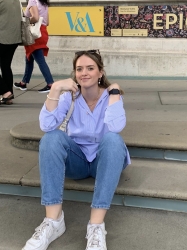 Latest posts by Hannah Gravett (see all)
Share the story