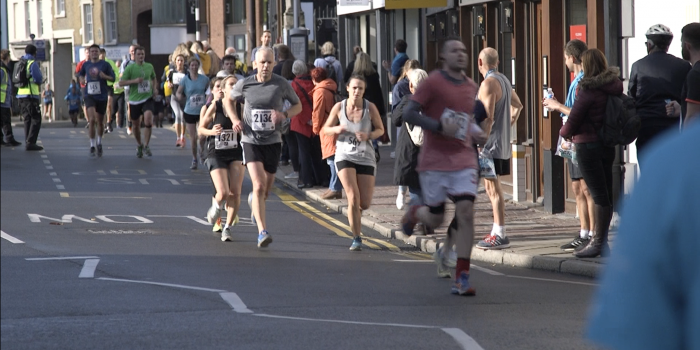 Hundreds of runners dashed through Kingston on October 6 in attempts to set new personal bests and raise money for charity at the town’s half marathon.

Roughly 1500 runners set off from Kingston’s historic marketplace at 8.30 am in the morning, many accompanied by friends and family cheering them on as they approached the finish line.

Paul Wedderburn, race director, said: “The weather turned out fantastic and the course was great – we’re all very pleased.

He added: “I’d like to thank the council and Kingston First for supporting the race.”

Participants were awarded medals and invited to have their photos taken whilst posing on a throne that had been installed at the marketplace for the race.

Luke Workman, a participant in the race, said: “I’m running for Mencap charity, they organise activities for the disabled and help them live more rounded lives.

When asked what he had planned for the rest of the day, Mr. Workman said: “I’ll probably have to walk around for a bit, and then a giant pub lunch somewhere.”