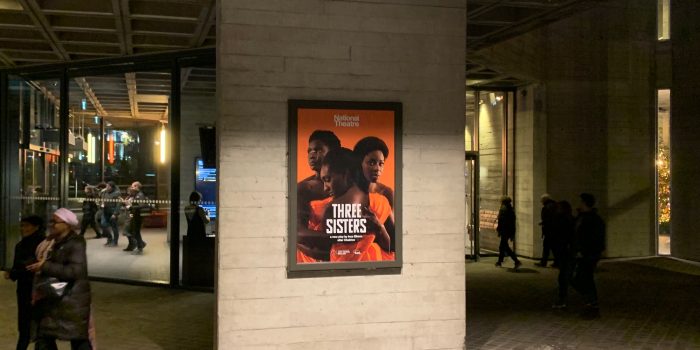 ‘Three Sisters’ by Inua Ellams is a beautifully tragic tale of loss that steadily develops into social commentary surrounding identity, belonging and purpose within the context of war.

Ellams is a UK-based, Nigerian-born poet, playwright, and performer.  Ellams has written for the Royal Shakespeare Company, Royal National Theatre, and the BBC. In June 2018 Ellams was elected Fellow of the Royal Society of Literature in its “40 Under 40”.

He first brought the black experience to the theatre stage with his smash hit ‘Barber Shop Chronicles’ this summer. Following the success of his play, it was to the delight of the fans that he returned to the National Theatre to give a heart-breaking retelling of Chekhov’s ‘Three Sisters’ directed by Nadia Fall.

Inua’s retelling is set in 1960s Nigeria during the Biafran War telling the story of three sisters Lolo, Nne Chukwu and Udo following the loss of their father. Each sister experiences their own understanding of loss and how it has affected – and continues to affect – them.

Inua makes it very clear from the beginning of the play the richness and importance of the story that is about to unfold. Set in a small village in Owerri, Nigeria which works almost as a microcosm of society today, the play comments on the rigid gender roles that War reinforces.

Family and sisterhood was the central theme of the play and what brought all the characters together.  Lolo, the oldest, wisest sister is a smart woman, a teacher holding the weight of her family after their father’s tragic passing and the grievances of her pupils.

Nne Chukwu, the quiet sister bursting at the seams with potential, wishes life dealt her a different set of cards but has to hold back her true self in fear of bringing shame to her family name and tradition.

Udo, the youngest of the sisters, acts as the perfect mixture of both sisters, the knowledge of Lolo and the beauty of Nne. The Biafran War, meanwhile, acts as an uninvited long lost relative at a family wedding. Its presence is strong and becomes tied to the family’s triumphs and misfortunes. As said by the sisters beloved but easily influenced younger brother: “The War changed everything and nothing at the same time.”

Mist rises and falls dancing in and out of the wheat bushes in front of the house which frames the set. The chilling vocals and presence of Oka Mbem, the chant poet, narrates the audience down the timeline leading to the Biafran War and its aftermath.

Inua has the ability to highlight how the war didn’t end with the three sisters, but it continued for generations to follow. Themes emerge such as the war between the different tribes in Nigeria, war between lovers, brothers, sisters and family.

And as all is fair in love and war, the play ends with the hope that each character in the play would find their purpose. The overriding message of the play is whether we will let history repeat itself.

As said in the opening scene: “The son is today what the father was yesterday”.  The message that Inua hopes the audience will take with them is to understand their history and to learn from the decisions these three sisters made and understand why they had to.

The audience is strapped in for an emotional journey of loss starting with the loss of the three sisters’ father. Inua reimagines grief that the sisters face and shines a light on the beauty in the struggle as they try hard not to lose what they needed the most, hope.