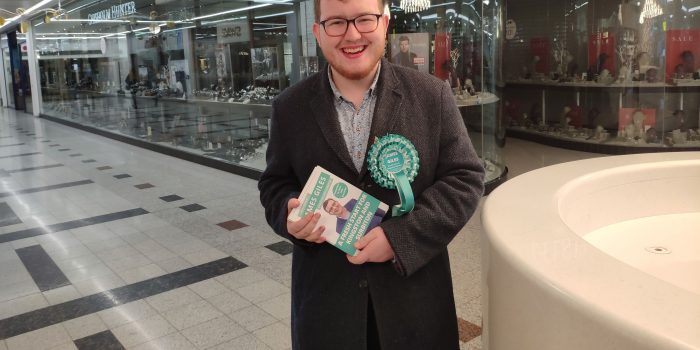 James Giles, the teenage independent candidate for Kingston and Surbiton in the upcoming General Election, says he is “absolutely in it to win it”.

At 19 years and 8 months old, James Giles is both the youngest candidate standing in the London area and youngest independent candidate in the country.

If elected, James would be the youngest MP to date. The current youngest MP, Mhairi Black, was 20 years old when she was elected in 2015.

Raised in what he described as “an overcrowded council flat”, James believes his political inclinations come from his mother.

He said: “My mother has always told me from a young age, ‘If you can help someone, you should’. That’s where I get it from really.”

Having campaigned on local issues since the age of 14, James decided that this year’s General Election was a great opportunity to “stand up for Kingston”.

He said: “I got to a point where the election was called and a few local residents said to me, ‘Why don’t you stand?’ I thought about it, and I thought, ‘Yes, okay, I will’.”

James has turned to crowd-funding his campaign.

He said: “We’re people powered. I don’t have any big business or fracking companies donating to me.”

James is a first-year politics student at Royal Holloway University and is conducting his campaign in between attending classes.

The decision to run as an independent candidate, he said, is because he has “never been a member of any of the main parties”. He said: “I’ve always just done my own thing really, whatever I think is right for the local area.”

He is, however, a campaigner and Press and Communications Officer for Kingston Independent Residents Group, a local pressure group and registered political party.

As a part of this group, James has come under criticism from the local council for being “disruptive” during meetings and feared he could be banned from attending.

In January 2018, James was called an “appalling little child” by council leader Kevin Davis, for which he has later apologised.

Despite this, James believes he can win over locals with his campaign which, he said, is a “hyper-local ticket”, focusing on local services such as schools, policing and the NHS.

He said: “It’s about local services, because Ed [Davey] may sing the song on Brexit but once that’s done one way or the other, what the hell does he stand for anymore?”

Though he is aware that he faces an uphill battle, he is optimistic about his chances.

“I do think there’s something different this time. If you look at the EU election results here in Kingston, just this year in May, the Conservatives came fourth, Labour came fifth. And I think that says that people aren’t sticking to their traditional party lines anymore.

“Talking to people on the streets, going out leafleting at stations, the message is, ‘We want something different’.”