Some films slipped under the radar because of Covid-19 and Dark Waters was one of them. It came out at the end of February 2020 in the UK, but quickly lost recognition when cinemas had to close their doors as the UK went into lockdown mid-March.

Dark Waters retold the true story of lawyer Rob Bilott’s case against company DuPont. The film was based on “The Lawyer Who Became DuPont’s Worst Nightmare”, a New York Times Magazine feature by Nathanial Rich.

In a case which started in 1998, local farmers, residents and company workers from West Virginia claimed to have suffered serious illnesses linked to a chemical leak in their water supply.

A study which was funded by DuPont as part of a legal settlement with the residents of West Virginia found that the chemical was likely linked to six diseases: kidney cancer, testicular cancer, thyroid disease, ulcerative colitis, high cholesterol and pregnancy-induced hypertension.

The chemical which was leaked into the waters is called Perfluorooctanoic Acid (PFOA). It is one chemical belonging to a large family of over 4,500 fluorinated substances known as PFAS.

PFAS are labelled as “forever chemicals” because they never breakdown in the environment.

PFAO is a great repellent of water and grease. DuPont manufactured a plastic material called Teflon, which had PFOA in it, and is famously known for its non-stick abilities in pots and pans, widely used by people across the world.

Studies have found that low levels of the chemical are present in just about everyone’s blood.

Another shocking discovery revealed in the film was that in 1962, DuPont scientists conducted two controlled experiments on their workers. The first involved lacing volunteers’ cigarettes with Teflon. Nine out of ten people become noticeably ill with flu-like symptoms.

The second experiment aimed to see how many cigarettes, laced with lower doses of Teflon, a worker would need to smoke to become similarly ill. It was six to ten cigarettes.

Dark Waters is a “must-see film” not only because Mark Ruffalo, who played Bilott, gave an Oscar-worthy performance, but because it exposes the chilling fact that the majority of us have been exposed to the toxic chemical Teflon.

It truly captivates the viewer throughout, making them eager to find out the dark secrets DuPont has been hiding from the world.

Dark Waters included some of the real victims. At one point you catch a glimpse of Bilott in the background, highlighting that this story is not just something to watch and forget about, but that it tells us of a real-life shocking issue. 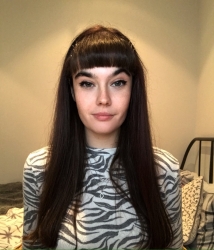