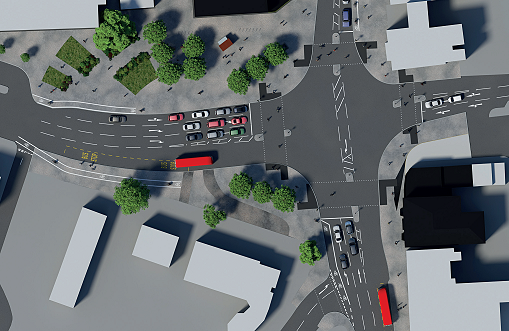 The proposal would have seen the removal of Fountain Roundabout and signalled crossroad put in its place. Credit: Kingston Council

Kingston council has scrapped proposed changes for the Fountain Roundabout after receiving considerable negative feedback from the public.

The proposal, part of the wider Go Cycle scheme which aims to encourage more people to cycle, had originally been agreed by the council and would have seen the removal of the historic Fountain Roundabout and the introduction of signalled crossroads.

In a statement put out following last Tuesday’s full council meeting councillor Terry Patton, portfolio holder of the Go Cycle programme, said: “We promised we would listen to residents’ concerns and we have concluded that the council administration should no longer progress the proposal for Fountain Roundabout.”

Around 300 residents took part in a protest march earlier this month at the roundabout, which includes a fountain with origins dating back to 1892.

Protest organiser and chair of the Malden Independent Community Organisation James Gill said: “The opposition was painted as very much heritage versus safety because of the fountain on the roundabout, but that played a very small part.

Concerns were also raised by local cyclists who felt that the proposals did not provide enough safety for anyone riding a bike.

Jon Fray, of Kingston Cycling Campaign, said: “We didn’t think the planned scheme was something cyclists and potential cyclists would want to use.

“Essentially what they were saying was at this junction cyclists would have to use the pavement.

“If they were going to spend £1-2m we wanted to see something better. There should be some separate cycle paths.”

Fray said that despite the scrapped proposals many cyclists do still wish to see amendments made that would accommodate both residents and cyclists. He suggested a Dutch-style roundabout which would keep the fountain but would have cycle tracks that go all the way around and zebra crossings on each arm.

Giles said: “I don’t think the residents are opposed to making the roundabout smaller or making some amendments to make the roundabout better for cyclists. It was just that this proposal was not right.”

The decision to scrap the proposal was triggered by a community call-in, whereby residents of the borough announce their disapproval of a council decision or proposal.  One hundred responses are needed to take the issue to a full council meeting and the Fountain Roundabout call-in had 987 responses, and subsequently a motion to scrap the changes was put forward.

Kingston Council has yet to announce whether it will still pursue changes to the roundabout following the decision.

Jean Cousens, senior democratic support officer at Kingston Council, said: “If anything was going to happen it would need a new proposal to be put forward to the residents committee of the council, but at the moment nothing is happening.”