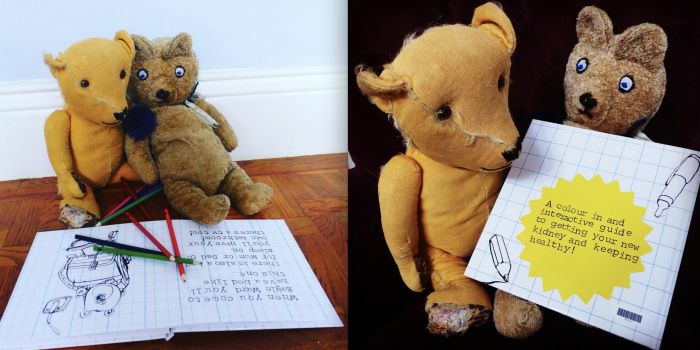 Prototype of the ‘My New Kidney’ book Photo by Georgina Potier

A Kingston graduate has teamed up with current students and university academics to create an interactive book aimed at helping young children through the difficult process of having a kidney transplant.

Georgina Potier, 36, who created the innovative book called ‘My New Kidney’ was under the care of Great Ormond Street Hospital until she was 18 after being born with multicystic kidneys.

Potier wanted to use her own experiences to help other children who would go through a kidney transplant, like the ones she received at seven years old and then later in adulthood.

Potier, who wanted to use her skills from her degree in Illustration, said: “It dawned on me that I could match my knowledge of having the operation at two different stages in my life with my skills as a designer to create something that would help children as well as their families as they went through the process of this major surgery.”

Wilson is a kidney transplant recipient and an ambassador for Kidney Research UK.

The popular project has had over 100 backers already and received tremendous support.

One backer, Sarah Duncan, said: “This is a really great project that will make a huge difference to the lives of poorly children at a really scary time. The prototype looks amazing and I can’t wait to see the finished product!”

The book can be personalised by the children throughout their transplant journey to include such details as their diet, medications and the people looking after them.

To find out more please see the video below created by Eiril Linge and Beth Madely current third-year students from Illustration Animation BA at Kingston University.