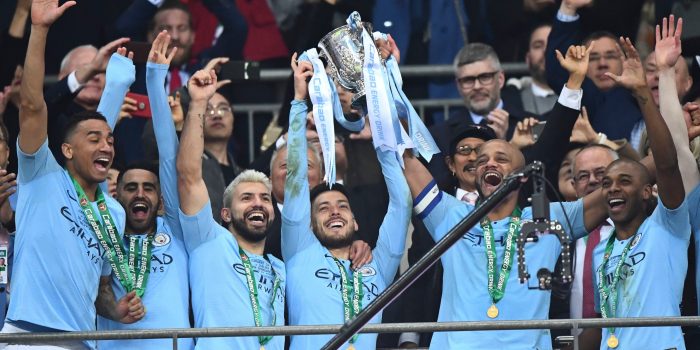 With the Champions League in full swing and a tantalising top-six tussle in the Premier League beginning to shape up, this game presented two teams with bigger fish to fry – in theory, at least.

Both Chelsea and City lined up at virtually full strength, and Pep Guardiola’s side came out of the traps in familiar fashion, immediately employing their brand of calm, possession-based football.

City kept the ball in Chelsea’s defensive third for most of the first half, and whilst most teams would crumble under this pressure, Sarri’s side remained disciplined, kept their shape and denied the reigning English champions their trademark early goal.

Chelsea persisted, frustrating City and almost dealing first half damage themselves. David Luiz’s searching ball put Kante through on goal, only for him to be bundled to the ground by makeshift left-back Oleksandr Zinchenko, who was perhaps lucky not to have seen red.

As expected, City’s attacks continued to come in waves despite failing to break the deadlock. Bernardo Silva and Sterling caused havoc down their respective flanks, whilst Kevin De Bruyne put on a familiarly electric display in the centre third and showed numerous sparks of his routine brilliance. 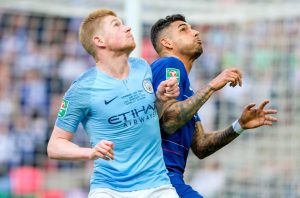 De Bruyne and Emerson challenge for the ball.
Photo by Robin Pope/Frozen in Motion/REX/Shutterstock (10112737d)

City’s first sniff of glory fell on 56 minutes, when the ball dropped to Aguero following a scuffed effort from Nicolas Otamendi, the marksman comfortably slotting the ball home from close range only to have his celebrations halted by the offside flag.

With the teams beginning to tire, the trajectory of the game thus far should have seen the play open up for City. However, Chelsea appeared to come out of their shell as the second half progressed, neglecting the low-block and moving the ball with pace and purpose.

N’golo Kante’s bullish energy and work rate saw him repeatedly chase opponents down and win the ball back in midfield, whilst the always electrifying Eden Hazard charged at the City defence, causing problems every time he touched the ball – the pair demonstrating why they are Chelsea’s two finest talents.

Chelsea nearly saw their efforts rewarded during the final half an hour, the game’s best two chances falling to the blues in quick succession. On 66 minutes, Hazard galloped onto the ball following a deftly threaded through-pass from young left-back Emerson Palmeiri, squaring to an onrushing Kante who blazed the finish over the crossbar.

Less than ten minutes later City were picked apart by a neat Chelsea passing move. Hazard again collected the ball in the final third and pushed it out wide to Pedro whose cross-come-shot could only find its way into the arms of Ederson.

With regulation time coming to a close, both managers showed signs of intent with a series of attacking substitutions – Leroy Sane, Ilkay Gundogan, Gonzalo Higuain and Callum Hudson-Odoi were all introduced – and the game’s most open period of play followed.

Both teams continued to threaten, but Chelsea again found themselves with a clear chance to clinch victory when Ruben Loftus-Cheek’s superb turn and first-time pass found a marauding Hazard, whose advance was mistakenly adjudged to be offside.

The game pressed on into extra time, and the drab prospect of penalties began to loom; it appeared as though the game’s most compelling moments had already come and gone.

However, with 117 minutes on the clock, the mood took an abrupt turn. An already struggling Kepa Arrizabalaga found himself supine on the Wembley turf following an aerial clash, and was set to be promptly replaced by Willy Caballero. 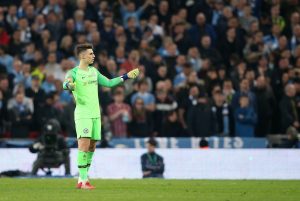 In what proved to be a bizarre chain of events, the young Spaniard hastily returned to his feet and refused to leave the pitch, frantically gesturing towards the Chelsea dugout to make his message clear.

Amidst a fit of rage and confusion, an incandescent Sarri eventually submitted to the wishes of the club’s record signing and retracted his decision, forcing the stripped and ready Caballero to return to his seat.

The teams lined up for penalties and, carrying a self-inflicted burden of pressure, Kepa looked to have suffered the worst possible fate, allowing Aguero’s tame spot-kick to trickle underneath his body.

It was a shocking lapse of judgement for a goalkeeper of his stature, but minutes later the 24-year-old looked to have redeemed himself, diving to his right to bat away Leroy Sane’s effort.

But City soon regained their advantage. David Luiz’s long, winding run-up saw him clip the outside of the post, and despite Hazard’s characteristically audacious panenka to keep the Blues’ hopes alive, Sterling was able to emphatically convert the decisive penalty.

Despite narrowly falling to defeat, Chelsea offered a surprisingly bold and resilient performance, particularly following their 0-6 drubbing in a visit to City just two weeks prior. A valiant effort, but one perhaps tainted by an instance of sour controversy late on, seeing Chelsea spiral further into a prevailing state of disarray.

Whilst far from being a canter, City’s slender victory earned them their third league cup title in four years, and their first of a potential four trophies this season.